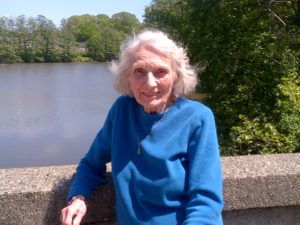 Winifred Mae Flannigan was born in Wallasey, England on January 27, 1915, and emigrated at the age of nine with her family aboard a passenger ship that set sail from Liverpool, England.  With her characteristic boundless energy, she entertained her fellow passengers on stage with spirited British ditties.   It was that same outgoing personality that won her many easily-made friends, and that comforted her patients when she became a Registered Nurse doing private duty at Staten Island Hospital.

Winifred’s career path was sealed when asked by her third grade teacher, Miss Cusick, what she wanted to be when she grew up.  Winifred replied, “A Nurse,” without any hesitation.  She never lost the desire, the passion, or the calling for all the years of her life, even after she retired in 1987 from private duty practice.

Winifred graduated and taught in the first nursing class at Wagner College in 1938, and went on to become the President of the S.I. Nurses Alumnae Association, a position she held for many years and which required that the old school group meet on Nurses Day every May at the Staaten for a luncheon to reminisce about “the good old days.” At that time, nurses were the silent force, dispensing medication and soothing words at the side of their revered doctors. The R.N. then wore a pristine white uniform, white cap with a black velvet band, a navy blue cape and white shoes with matching white stockings. No part of this uniform was ever wrinkled or stained by the tasks at hand.

Winifred married Charles Flannigan, who lived down the block on Harrison Street in the then charming neighborhood in Stapleton at the time when they were both in their teens.  From high school onwards, he continued to court her with long walks at Silver Lake, or “over the hill” to Port Richmond and back to the Wagner dorm where the nursing students lived.  Day or night, the Cole Porter song, “Night and Day” became their song and was marked on every card either exchanged until Charles passed away in 1984.

Two daughters, Patricia and Gail, completed the family and grew up in the comfortable home on Pickersgill Avenue in Arrochar which is still in the family name.  It will always be known as “Winifred’s Cottage.”   Accompanied to the Boardwalk in later years, first with Jeeves and then by his successor, Tess, Winfred could be seen daily driving her blue Mazda to South Beach for their three- mile round trip walk.  Easily recognized by any number of people, Winifred would engage in subjects such as the weather, politics, books, or dog antics with fellow walkers known only by their first names.  Sharing this almost daily ritual went well into Winifred’s mid-90s.  She was only slowed by a fall and broken femur that ultimately led her to Eger Nursing Home, and only after Tess had ended her companionship with dignity and a wagging tale.

Besides her love of nursing and animals, Winifred could be found in any Staten Island branch of the New York Public Library’s version of Cheers, where everyone knew her name.  By her own account, she read “voraciously.” So, it was not surprising that she recalled her trip to London at the sprightly age of eighty-four, while accompanied by Gail, her daughter, as her best adventure.  There, all the literary characters came to life on the streets she already knew so well from her readings.  Each night there, a foray to the local tea shop at 10 PM would yield a Peppermint “cuppa” followed by a recap of the day’s myriad, yet inexhaustible activities.

Winifred loved also to attend concerts and ballets, reading the New York Times and the Staten Island Advance that made for lively conversations.  She enjoyed watching Public Television and listening to WQXR, the classical music station that was always tuned in, especially for Tess in Winifred’s absence.  Tess was especially fond of Mozart, according to Winifred.

Winifred was pre-deceased by her husband, Charles and daughter, Patricia Shea Allmand.  Besides her daughter and best friend, Gail, and her loving son-in-law, Terence, Winifred is also survived by her devoted grandson, Scott, as well as a host of admiring friends and acquaintances.  She will be remembered by all as incredibly youthful, both physically and in spirit. She was often asked what the secret to her longevity was.  She said it was being optimistic, finding only the good in people, and “being British.”  This latter detail seemed to transcend her American citizenship, as if this infused her life with grace and strength from the time she was a young girl singing on the transatlantic voyage, facing an uncertain future.  Happily, the journey was an exceptional one for her and for all who knew her.

Arrangements have been made for cremation, and a private ceremony will be held for her interment beside her husband, Charles, at St. Mary’s Cemetery in Grasmere, Staten Island sometime in the future.