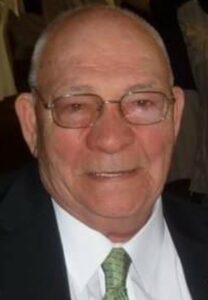 Thomas J. Woodford, Sr. passed away at home surrounded by his family on 3/4/22.

Visitation will be held at Cherubini McInerney Funeral Home, 1289 Forest Ave, Friday, 3/11, 2-4 and 7-9. Funeral Service is scheduled for Saturday, 3/12 at Holy Family Church, 366 Watchogue Road, 11:00 am with Christian burial at Resurrection Cemetery.

A loving and devoted Husband to Florence, the love of his life, whom he had buried just four days prior to his passing. He and Florence were married just over 60 years. A loving, caring Father, Pop Pop and a true and kind friend to many. Born in Brooklyn in 1937, Tom was a graduate of Our Lady of Perpetual Help and William E. Grady High School where he studied cabinet making.

After graduation, Tom enlisted in the United States Marine Corps serving stateside, Okinawa, Japan and the Philippines from 1955 through 1958 achieving the rank of Sergeant. After being discharged, Tom was employed as a cabinet maker in DC926 for several years before becoming an Ironworker with Local 40 NYC. After leaving Ironworking, he joined Local 5 Boilermakers and was employed by the NY City Dept. of Sanitation as a Blacksmith/Welder retiring after 25 years in 2002. During his Local 40 years, he worked on many skyscrapers throughout New York City including the World Trade Center which he worked alongside his three brothers and their Father. Years later while in the Dept. of Sanitation, he assisted at the Landfill after the attacks of 9/11. It gave him great pride when his grandson, Keith Woodford, joined Local 40 and was a part of the rebuilding of the Freedom Tower, which made it three generations of Woodford’s at that site.

During Tom’s work career, he also attended and graduated from the College of Staten Island. Tom along with his wife Florence, were co-founders of Advocates for Services for the Blind Multihandicapped, opening the first group home in 1989. He has worked diligently to provide a quality of life for his daughter Kim, as well as for all young people with multiple disabilities. Through the years, he continued to help with repairs and making the group homes a better place. The ASBM Agency operated six group homes and a day habilitation program up until they became a larger agency by merging with Program Development Services last year.

Tom helped family, friends and St. Rita’s Church and school fix any problems or make cabinets and shelving whenever needed. There was rarely anything he couldn’t fix or invent to make something work more efficiently. Tom had made beautiful wooden furniture, cabinetry, chairs, chests and wooden toys for his grandchildren. In earlier years, he also taught woodworking to children and adults at the Goodhue Center.

He enjoyed gardening, both flowers and vegetables, as well as traveling with his wife Florence. They traveled most of the States including Alaska. Also, extensively throughout Eastern and Western Europe, Russia, Morocco as well as gone on many cruises.  They enjoyed visiting extended family in Newfoundland, Canada where both of their parents were from.  One of his greatest joy’s was spending time with his children, grandchildren and great-grandchildren.

Tom is predeceased by his wife, Florence, brothers William, Nicholas and George Woodford, his parents Nicholas, Lucy and Lilly Woodford.

**In lieu of flowers, he requested donations be made in his memory to: Program Development Services Inc, 6916 New Utrecht Ave. Brooklyn, NY  11228**