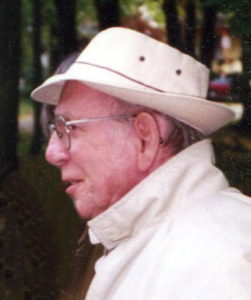 Stanley M. Czarnecki, 93
WWII Merchant Marine, dedicated family man, craftsman
Stanley M. Czarnecki, 93, passed away peacefully at Sea View Nursing Home surrounded by his loving family on Monday, Oct. 29, 2018.
Born in Bayonne, N.J., Mr. Czarnecki was the son of the late Frank and Kordula Czarnecki. After graduating from Bayonne Tech H.S., he served in the Merchant Marine during World War II, where he received a Merchant Marine Combat Medal.
After serving his country, Stanley worked for over 35 years with Maritime Industries as a seaman working on ships and tug boats until he retired in 1980.
He was a member of the H&S American Legion – Cichon Post No. 1578. He also enjoyed playing the accordion. He was a self-taught craftsman, creating items out of wood and metal. But above all, he was a dedicated family man.
Stanley was predeceased by his beloved wife, Ann Marie, in 2007.
Surviving are his loving daughter, Karen Bobin, and his son, Steven Czarnecki, along with great-granddaughter, Michael-Lauren.
Funeral will be held at Cherubini McInerney Funeral Home, 1289 Forest Ave., S.I., N.Y., on Monday, Nov. 5, at 10 a.m. followed by a burial at Holy Cross Cemetery in North Arlington, N.J. Family and Friends are invited for viewing on Sunday from 2 to 4 p.m. and 7 to 9 p.m.