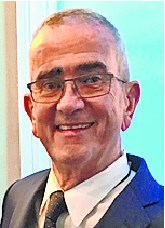 Ronald Vincent Waite, 71
Retired NYPD lieutenant, outdoorsman, family man and volunteer
Ronald Vincent Waite, 71, lifelong New Brighton resident, passed away on May 12th, 2020 after a five-week hospitalization, from complications related to the Covid-19 virus. Ron was a loving and devoted father, grandfather, and close friend to many. He was the backbone of a large family and a respected pillar of his community. He will be greatly missed by all who knew him.
Ron retired from the NYPD in 1999 after 33 years with the Department. The bulk of his career was spent working in the 6th, NSU1, Midtown South, and 1st Precincts in lower Manhattan. As a Lieutenant, Ron was assigned as the commanding officer of Mounted Troop E in Brooklyn. He was proud of his time spent with the NYPD and loved getting together with friends and reminiscing about old times.
Ron is survived by two children, his son Bryan Waite and wife Eva, and his daughter Dr. Laura Moore and her husband Jules. His two grandchildren, William and Thomas Waite, were the center of his world. He leaves behind his loving partner, Maria Laboriel, and two brothers, Vincent and Donald Waite. He is also survived by a huge extended family of in-laws, cousins, nieces and nephews. He was predeceased by his late wife Anita (Chorman), brother Paul Waite, and parents Donald and Margaret Waite.
Ronald lived a full life and accomplished so much in his 71 years with us. He overcame many obstacles and used his experiences to better the lives of those around him. Ron lost his wife suddenly in 1987 and raised two children as a single parent. He overcame crippling rheumatoid arthritis. He overcame alcohol. He beat multiple debilitating medical diagnoses, including two separate battles with stage-4 non-Hodgkins lymphoma.
Ron was a father figure to many and his door was always open to those in need. He was full of good advice and served as a source of strength to those around him. He was active in many charities. For the past 20-plus years, he volunteered and helped to run the OLGC food pantry.
His countless hobbies included a great love for the outdoors. His happiest times were spent with his grandchildren at Silver Lake Park or fishing at the family cabin in the Adirondacks. He was an avid gardener and reader. He digested thousands of books. He enjoyed adventure and travel, recently exploring Costa Rica, Italy, North Africa, and the Galapagos Islands. Later in life he took up hobbies including golf, yoga, and painting.
In lieu of flowers, please consider donating to The Leukemia & Lymphoma Society or to your local food bank.