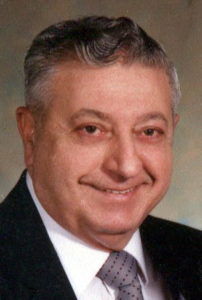 He was born in Mariners Harbor and lived there until over 25 years ago, when he moved to his present address. He retired from NYC Sanitation in 1990 after 21 years of service. He served as a corporal in the U.S. Army from 1948 to 1951.

Louis was a member of St. Mary’s of Assumption for most of his life, serving as an usher, president of the parish council, and as a fundraiser on the finance committee.

Louis was an usher at Our Lady of Mt. Carmel R.C. Church and served up until this past Saturday.

He was a Past Grand Knight, 4th degree member for the Knights of Columbus, Christ the King Council, and was a district captain for the Democratic City Committee. He enjoyed bowling, baseball and was a lover of the New York Yankees.

Louis was predeceased by his wife, Gilda (nee Soriano), in 1992, and his brothers, Michael, Vincent, Antonio and Dominick. He is survived by several nieces and nephews as well as great-nieces and nephews.

Funeral is from Cherubini McInerney Funeral Home, formally Meislohn-Silvie, 1289 Forest Ave., on Saturday at 9:15 a.m. Funeral Mass is at Our Lady of Mt. Carmel R.C. Church at 9:45 a.m. Interment is at St. Peter’s Cemetery. Friends may visit Thursday and Friday from 2 to 4 and 7 to 9 p.m.

In lieu of flowers donations to Our Lady of Mt. Carmel would be appreciated.