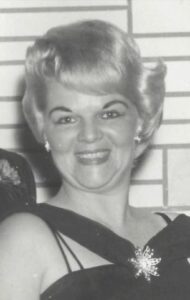 Janet (Zubeck) Cannizzaro, breathed her last on Valentine’s Day.  She is now walking alongside her treasured Lord and Savior; encircled by her beloved husband; Joe and her loving family.

As a child, Janet grew up in Port Richmond on John Street in Staten Island and in her teenage years, the family moved to Wooley Avenue in Westerleigh.  Janet graduated from Port Richmond High School where she met her husband, Joseph Cannizzaro, when she was 16-years old.  Joe was her one and only love, and they married on February 26th in 1944.  Early in their marriage, Janet was a dedicated employee of Proctor & Gamble in Port Ivory (Howland Hook) on Staten Island.  On October 28th, 1958, she gave birth to her only child; a son, Joseph Cannizzaro and the family settled in Travis.  Janet was the namesake of her husband’s restaurant, Ja-Nets, which was a famous Richmond Avenue eatery specializing in footlong hot dogs and square hamburgers during the 1960’s.

Janet was passionate, not only about her family and faith, but also building a home filled with love that was welcoming to all who entered. Everyone who had the privilege of meeting Janet were blessed to experience her vibrant, generous, and beautiful heart. She enjoyed bowling, travelling, spending time with her sisters and going out to dinner with her husband and son.  Janet was loved by many and will be dearly missed.

Janet is survived by her devoted son Joseph (Joe) and his wife Kella.   She was preceded in death by her parents and her 7 sisters, Tilly Klenk (Albert). Helene Duffy (Arthur), Joan Klenk (Fred), Marie Dembowski (Eddie), Lee Kupper (Charles), Margie Hannon (Russell), Martha Sheridan (Guy), along with her only brother; Edward Zubeck.

Arrangements have been entrusted to Cherubini McInerney Funeral Home on 1289 Forest Avenue in Staten Island. The family will be receiving guests on Wednesday, February 23rd with visitation from 4pm-8pm.