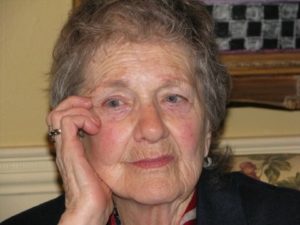 Grace Louise Vaglio, 91, of Castleton Corners passed away on Wednesday, March 8,2017. Grace, a Staten Island native was born on April 27, 1925. During World War II , Grace was chosen to be a pin up girl for her union. She was a staffer at General Instruments, a company in Jersey City, where she was responsible for constructing submarine parts for seamen at war. Grace passed away peacefully at Clove Lakes Nursing Home. Grace will be remembered for her spunk, humor, singing, style and love of her family. Her legacy will live on through her family. Grace is survived by her daughters and son in laws, Carol and Bruce Rabold, Donna Brower, Jeanne and John Wisinski,  Josephine and John Mauldin, Michele and Victor Rossabi and Robin and Patrick Ryan, as well as her grandchildren, Janine Fanuzzi, Keith Rabold, Kevin Rabold, Jesse Wisinski, Patrick Vento, James Mauldin, Ashley DeMauro, Megan Wisinski, Jillian Mauldin, John Mauldin, Chelsea Ryan, Cole Ryan and Victoria Rossabi, and great grandchildren Katlyn Rabold, James Rabold, Nathaniel Rabold, Catherine Rabold, Cullen Wisinski, Audra Wisinski and Valerie Vento. Grace is now joined in heaven with her husband Ernest Vaglio and son Walter Brower. Funeral service at 8:30 am from Cherubini McInerney Funeral Home, 1289 Forest Avenue (formally Meislohn Silvie ). Internment to follow at St. Peters’s Cemetery.  Family and friends will be received on Friday from 2-4 & 7-9pm.