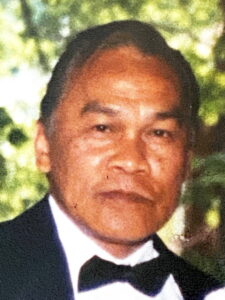 Salvador Viloria Corpus was born in the town of San Marcelino, Zambales in the Philippines on April 21, 1935 to Jose Cruz Corpus and Policarpia Viloria Corpus. He was the youngest of five children and was nicknamed “Buddy.”

Also known as “Doc” to his friends, Salvador graduated from the University of Santo Tomas School of Medicine in the Philippines, where he met his future wife, Dr. Marina Alegre. He pursued surgery as his specialty and completed his residency in V. Luna General Hospital in Manila. He continued the rest of his surgical training in New York. Salvador also served in the Armed Forces of the Philippines for two years in the mid 1960s where he was ultimately promoted from a 1st Lieutenant to a Captain. After migrating to the US in 1967, Salvador and Marina settled in Staten Island in the Silver Lake Park area where they raised four children. Salvador worked in the surgical departments’ of Caledonian Hospital and Kings Highway Hospital in Brooklyn until his retirement in 2004.

In addition to being a gifted surgeon, Salvador possessed a creative spirit that led him to pursue certain hobbies. He skillfully crafted model racing boats by hand and won several Hennessy awards for craftmanship. As a true car enthusiast, Salvador was an active member of the Staten Island Region Antique Automobile Club of America. He enjoyed restoring cars with the help of his friends from the club and was a proud owner of several prize winning cars.

On November 28, 2021, Salvador passed peacefully after years of suffering from several medical issues. He is survived by his wife Marina of sixty years; his four children, Liza Corpus, Eric Corpus, Sandra (Gary) Bonoan, and Benjamin (Bonnie Baranoski) Corpus; seven grandchildren, Devin, Marcus, Maxemilien, Nicolas, Leo, Miranda, and Sydney; his sister, Irene Avena; and numerous nieces and nephews. He is predeceased by his parents and brothers, Ernesto and Jesus; and his sister, Amanda Gangcuangco. He will be fondly remembered by his friends and family as Buddy, Uncle Buddy, Tito Buddy, Lolo Buddy, Doc, and Dad.

From Our Funeral Home to you… Please enjoy the video tribute