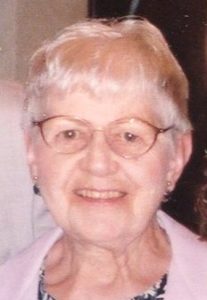 Angela Ann Siuzdak, 95
Devout Catholic enjoyed old movies, had a soft heart for animals
Angela Ann Siuzdak, 95, of West Brighton, died Feb. 8, 2020. She was one of 13 children of the late Anna and Wladislaw Perkowski. She served the Fathers at Blessed Sacrament Parish for 33 years. On Oct. 29, 2010, she received the Blessed Sacrament Church ” Centennial Celebration” honoree Certificate of Special Congressional Recognition in recognition of outstanding and invaluable service to her community. Angela worked in Manhattan before starting a family and was a member of the Mothers Guild in Blessed Sacrament. During the Blessed Sacrament Teen club days, she enjoyed assisting in their musical productions, primarily using her sewing talents to make costumes and sets. She enjoyed traveling to Miami Beach and visits to her children’s homes in North Carolina during the earlier years with her late husband, Victor. In 1999, on their 50th wedding anniversary, Angela and Victor arrived in Rome, with a special Mass celebrated that evening in their honor. Babci, as she was lovingly called, took special delight in Christmas Eve gatherings at her home with her children and grandchildren. Thanksgiving Day was no different, and at 88 years young she was still preparing turkey and sides for the dinner table at Vic and Anne’s. Mom had a soft and compassionate heart for animals. She enjoyed sharing stories about her two dogs and several cats. She enjoyed watching old movies and game shows. She loved her garden of flowers and her view of a statue of the Blessed Mother from her kitchen window. Mom was a very devout Catholic who attended morning Mass until her health began failing. She recited the rosary at least once daily and had a devotion to the Blessed Mother.
She was predeceased by her husband, Victor; grandson, Adam Thomas Czarnomski; sisters, Rose, Helen, Teresa, Sister Mary Margaret, Stella; and brothers, John, Ray, Peter and Walter.
She is survived by her sons, Victor (Anne), Peter (Judi); daughters, Margaret Stinson (Henry), Irene Czarnomski (Tom); grandchildren, Gregory, Matthew, James, Amanda, Colleen and Peter Siuzdak, Victor and Christopher Stinson, Sarah, Anna and Thomas Czarnomski; great-grandchildren, Alyssa Rose and John Peter Barricella, Dominic Victor Siusdak; and siblings, Catherine Perkowski, Philip Perkowski and Josephine Ostrowski.
Funeral from Cherubini McInerney Funeral Home on Wednesday, with a Mass at Blessed Sacrament Church (Mass time at 11 a.m). Interment is in St. Peter’s Cemetery. Visitation will be Tuesday from 2 to 5 and 7 to 9 p.m.