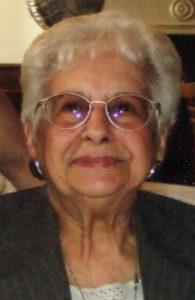 Victoria Anne Perrella, age 97, died at the residence of her daughter, Victoria Carullo, on April 10, 2020.

She was the only child of Patsy and Theresa Marote.  Victoria was born on September 9, 1922 in Bulls head, Staten Island, NY.  She spent her childhood in Bulls head and Rosebank.

Victoria attended PS22 in Graniteville, this is the same school where two of her daughters taught for over 30 years.  She attended Manual Training School and worked for Western Electric during WWII.  She was very proud of her service to the war effort, assembling radar equipment.

She is survived by her four daughters, 7 grandchildren and 7 great grandchildren, with two more expected this summer.

Victoria was predeceased by her parents, spouse and Great grand-daughter, Ella Rose Sabat.

Victoria and John were honored for their many years of service as foster parents by Catholic Charities.  They enjoyed trips to Florida and California, Broadway shows, and concerts, especially Frank Sinatra and Judy Garland.

She helped her sister in law, June Perrella celebrate her birthday with a hot air balloon ride.

For the past 10 years, she has been a resident of Island Shores.  Victoria had many friends there and enjoyed all types of activities, especially Bingo, and birthday celebrations.

Due to the Corona Virus, there will be a memorial mass at a future date.

Special thanks to her aides, Kate, Eileen, Lenore, Janet and Mika.

Donations in her memory may be made to SI University Hospice Program, or C.H.O.P, Children’s Hospital of Philadelphia.

*Private Burial will be held at St. Peter’s Cemetery*