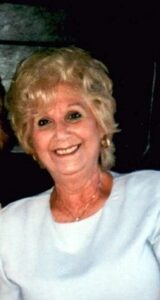 Rose Pierzynkowski, age 92, passed on Sunday, December 26, 2021. Born August 28, 1929, in Staten Island, New York to Henry and Concetta Parisi. She was the youngest of her three brothers and three sisters.

Rose was a lifelong resident of Mariners Harbor, where she met and fell in love with her husband, Eddie (Hun). They married on January 21, 1950 in St. Michaels Church. They continued to build their lives in Mariners Harbor and established a neighborhood laundromat business. They remained active in the community, in which they raised their three children. Sadly, she became widowed on December 26, 1968, when her husband passed suddenly. Rose was faced with the responsibility of being both mother and father to her children. She worked hard to provide and nurture them, the best she could. Some of her most cherished memories were the days spent with her sisters, brothers, many nieces, nephews and friends, sharing lots of food and laughing until the mop came out. She also enjoyed bingo in those days.

Her big mouth got her in trouble quite often, but her even bigger heart helped to quickly forgive and love her even more. So strong, so giving. Her way with words and spunkiness would keep you laughing and sometimes leave us wondering, “Did she really just say or do that?” Her vibrant personality left a lasting impression on anyone who had the pleasure of knowing her.

She spent her last days continuing to make everlasting memories with her children and grandchildren, in the sunshine, enjoying her favorite restaurants and neighborhood arcades. And of course, the lottery, waiting to hit the big one. In our eyes, she was already the biggest winner of all and will remain the life force in all of us forever.

“And when one of us is gone, And one of us is left to carry on Then remembering we’ll have to do, Our memories alone will get Us through…”