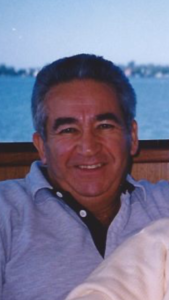 Robert Perricone died in the early morning hours of Tuesday, February 13, 2018 at home surrounded by his loving family after a long battle with Parkinsons disease.

A lifelong Staten Islander Bob was a graduate of McKee High School.  He and his wife Carol (Bishop) were married in 1956. Later that year he joined the NYPD.  In 1962 Bob became a member of the FDNY retiring in 1977, after which he and his wife owned and operated Kobren Pharmacy for 20 years.

In addition to his wife, Bob is survived by sons Thomas, Robert, and Paul, and daughter Randi Low, a sister Lorraine Divnich, 10 grandchildren and 5 great-grandchildren. He is predeceased by brothers Thomas and Daniel.

Bob loved nothing more than being in the company of his family. He enjoyed traveling, golf, and paddleball. He never missed an opportunity to go fishing and always said his greatest catch was his wife Carol.  In his retirement he also took great pleasure in spending time in Long Beach Island N.J. and Siesta Key, Fla.

Ask any of his friends or family, Bob loved a great practical joke and was the life of many a party.

In lieu of flowers donations to the wounded warrior project.

You may make your contributions online “In Loving Memory of Robert Perricone” at  support.woundedwarriorproject.org/Donate

Or you can mail your contributions to :