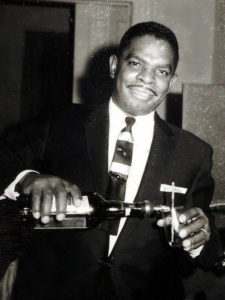 Rapfeld Grant Mullings (Bill) passed away on the morning of Wednesday, April 15, 2020, after a battle with COVID19 also known as the coronavirus. He was 90 years old.

Bill was born on November 12, 1929, in Panama to Cyril and Gladys Mullings. He completed 4 years of High School.  He did 2 years in the Army and 6 years in the Army Reserves in the 1950/60s. His rank was Corporal. He was Honorably Discharged July 1, 1960 and received the National Defense Service Medal. After Honorable Discharge he later became an MTA motorman with the NYC transit authority.

Bill was also a very proud member of the Boyer Lodge in which he is a lifetime Mason.  Known as, Past Master Mullings, Bill was an esteemed member of Boyer Lodge and he was regarded in high veneration in Prince Hall Masonry.  Past Master Rapfeld Mullings was raised to the sublime degree of Master Mason on April 7, 1975 and was a dedicated and faithful brother in Prince Hall Masonry for 45 years.  He was elevated to the highest position; that of Worshipful Master of Boyer Lodge #1 in 1983. On January 2, 2012 he was bestowed Life Membership in Boyer Lodge #1 for his years of service and dedication.

Bill married and had 4 children Sheila (Peanut), Raphael (Gary), Larry (Ricky) and Sandra (Lisha).  He is also a grandfather of 8, and a great-grandfather of numerous little ones who he sincerely adores.  He also has a sister Katherine “Alicia” Mullings-Romaine (Apone) and several other family members such as nieces, nephews, great nieces/nephews and cousins who he also loves dearly.  His predeceased family members are his Mother Gladys, Father Cyril, brother George (Minn), sister Evelyn (Sully), and brother Charles (Bally).