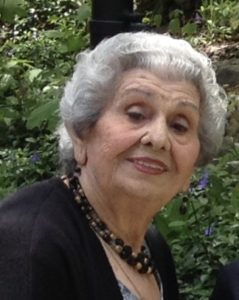 Phyllis was born on August 1, 1928 in Barletta, Italy to the late Maria (Filannino) and Giacomo Corcella. In 1944 she married Joseph Caputi and they immigrated to New York City in 1949.  In 1956 she moved with her family to Staten Island where she resided until 2007 when she moved to Tuxedo, New York.  From 2011 she lived in Ormond Beach, Florida returning to Tuxedo in 2019.

Phyllis was the beloved wife of the late Joseph Caputi (1923-1988).  She was the devoted mother of Letizia Rachmiel and her husband William, Joseph Caputi and his wife Linda.  Phyllis was the loving grandmother of William T. Rachmiel Jr., Alexander Rachmiel, Laura Pecoraro, Fabianna Caputi and Jeremy Caputi.  She was the cherished Nonna of eight great-grandchildren: Emily, Elizabeth, Holden, Clarissa, Luca, Daltrey, Joseph and Catherine.  Phyllis was the dear sister of John Corcella, Angela Piecora and the late Geremia Corcella.  She is also survived by her devoted daughter-in-law Joanne Devereaux.

Funeral arrangements by Cherubini McInerney Funeral Home, 1289 Forest Avenue.  Viewing will be on Saturday, August 29th from 8am to 10:30am.  Mass at St. Ann’s Church at 11:00am followed by a burial at St. Peter’s Cemetery.

In Lieu of Flowers donations to St. Jude’s Children’s Hospital, (www.stjude.org) would be greatly appreciated.