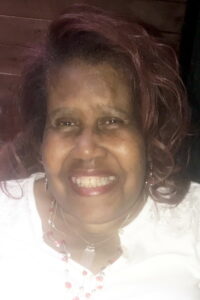 Pam began her life in Harlem.  Though by the time she was twelve years old, the growing family moved to the Gowanus section of Brooklyn.  Responsibility started at an early age as she began taking care of her younger siblings.   Pam attended Clara Barton H.S. in Brooklyn, NY.  There, she studied Nursing and graduated in 1965. After graduation she worked as a nurse’s aide.  She met Lawrence Kenniebrew in 1966 and married the following year welcoming their first child Lawrence Jr, in 1967.  Their second child, Monique followed in 1971.   Pamela continued her education at Kingsborough Community College, while co-parenting their children. She met Arnold Morman in 1972. She earned her Associate degree in Mental Health Sciences in May of 1976.  That same year, her son Jamal, was born.

She began her career at Brooklyn Criminal Court, Victims Services Agency in 1975. Pam eventually earned her Bachelor Degree in Criminal Justice from John Jay College. After 12 years with the court, she eventually began work for the State of New York at the Human Resources Administration as a fraud investigator.  In advancement of her career and simultaneously recognizing the need to assist her family, she changed jobs and went to the Jewish Board of Family and Children’s Services, there she could work part time.  She also dedicated herself to care for two babies, Ashley and Tiana.

They made their home around the corner from Pam’s grandmother, in the Gravesend section of Brooklyn.  In 1999 they made the move to Apopka, Florida.  Pamela returned to New York in 2004 and settled on Staten Island.  In her remaining years, she enjoyed retirement and time spent with her family, watching and enjoying their successes.