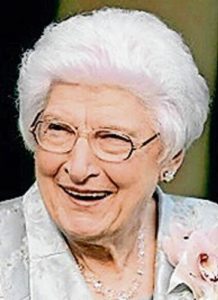 Mildred H. Polovina (nee Stipcic), a Staten Islander for most of her life, passed away from natural causes at Broomall Presbyterian Village, Pa., on Dec. 9, 2016.

She was born in Bethlehem, Pa., and moved to Staten Island when she was 5 days old. She lived almost her entire life on Staten Island before moving to Pennsylvania 12 years ago, to be near her daughter.
Her parents were peasants from a small village in Croatia. She was fiercely proud of her Croatian heritage. She read, wrote and spoke Croatian fluently and for as long as she was able to write she regularly wrote to relatives living near Zagreb.

She and her family settled in Mariners Harbor, but she spent most of her adult life in Port Richmond. She was an Honor Roll graduate of Port Richmond High School in 1940. During WW II she and her sister Anne worked at the Electric Boat Division of General Dynamics in N.J. where they christened PT 109 – the patrol torpedo boat commandeered by President John F. Kennedy when he was a young lieutenant.

After the war, Mildred reentered the work force and became a force of her own on Wall Street where for over 30 years she developed expertise in the international coffee and tea trade specializing in insuring international cargos with Volkart Brothers on Wall Street, and later with Hagedorn & Co. where she continued her career as an insurance underwriter specializing in coffee and tea shipments. She retired from full time employment in 1989.

She was an avid reader as a result of the encouragement of her grammar school teacher Miss Hattie Rundall. Until her last days Mildred spoke fondly of Miss Rundall and the joys of reading which she instilled. Because her birthday on April 18th coincided with the anniversary of Paul Revere’s famous ride, each year at her birthday celebration Mildred would recite, in its entirety, Henry Wadsworth Longfellow’s well-known poem Paul Revere’s Ride.

Funeral arrangements will be held at Cherubini McInerney Funeral Home, 1289 Forest Avenue, S.I., N.Y. 10302, with family and friends being received on Wednesday, Dec. 14 from 10 a.m. to noon, with a memorial service at noon followed by interment at St. Peter’s Cemetery immediately following the service.