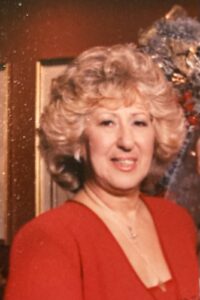 Mary Lou was the true Matriarch of her family, as the beloved mother of Janine Colletti and her husband George, John Sanginari and his wife Tracy, and Kenny Sanginari and his wife Justine, and the adored grandmother of Brianna, Nicholas, Chiara, Christopher, Lucas and Connor. She was the dear sister of Joann Cashman, treasured Godmother to Cheryl Provenzano and Mary Lou Barcia, and aunt to Jessica Provenzano, Nicole and Gabe Ponterio, and great-aunt to Peyton Layne Pontario, as well as being a special person in the lives of her Aunt Gloria, other nieces and many cousins. Mary Lou also enjoyed long-lasting, close friendships with many, like her best childhood friend, Joyce Tricarico, and her “partners-in-crime squad” all of whom she considered part of her family.

Mary Lou was a life-long Staten Islander who was born and raised in Port Richmond. She attended P.S. 21 and Port Richmond H.S. (and would often plan reunion get-togethers with her old friends from both), as well as the College of S.I. Mary Lou moved to Willowbrook for several years when she first began raising her family, before settling in Westerleigh where she has resided since 1974. She tirelessly worked full-time throughout her life, successfully balancing a happy, loving home for her children, while juggling their many sports schedules and extra-curricular activities, and putting them through Catholic grammar and high schools, college and law school. In her early 20’s, she worked as a clerk in a religious store in NYC, then returned to S.I. to work as an administrative assistant at Assumption Grammar School, legal secretary for the Law Offices of John T. Hall and John Coscia, and as an administrator at the Arthur Kill Correctional Facility for 20 years, up until the day it closed in 2011. She then transferred to another administrative position at the Queensborough Detention Center for several years. Mary Lou finally retired in 2013, taking her best friend, children and grandchildren on the Disney Cruise to celebrate.

In earlier years, Mary Lou was very involved in the PTA at St. Roch School and on the Women’s Auxiliary Board of WSLL; but, she had always been a very active parishioner of St. Roch Church throughout her life, being instrumental in the fight to keep the Church open, and serving as a member of its Senior Group, St. Ann’s Society, S.I. Chapter of Columbiettes, and volunteer for many church events, especially the annual Mother’s Day Brunch and Communion Breakfast she shared with her family .
Mary Lou was also an avid sports fan ~ she looked forward to watching the March Madness games and her favorite teams, the Mets and Yankees (coincidentally also her sons’ favorites) the Giants and, in recent years, the Providence College Friars and Penn State Nittany Lions to support her 2 granddaughter’s college teams as well.  Her favorite times of the year were definitely the holidays where she spent days making special holiday favorites for family and friends, including the Christmas cookie bake-a-thon tradition she started with her grandchildren.  Mary Lou definitely had a “sweet tooth” (Swedish Fish and all things chocolate!), enjoyed baking and cooking (best chocolate chip cookies and chicken cutlets ever!), and traveling ~ whether it was a bus ride to Atlantic City, summer family vacations in Ocean City, Maryland, or a trip on the auto-train to Florida, Mary Lou was up for anything! Yet, it was the times she spent with her family, that she was so very proud of, that she loved the most, making it a priority to attend all of the many baseball, basketball, football or soccer games, track and swim meets, cheerleading and dance recitals, along with all of the school functions that her children and grandchildren were involved in, even if it meant driving from S.I. to N.J. on any given day when there were often more than one event going on!
Everyone loved “Grandma Lou”! She was intelligent, strong, dedicated, had a great sense of humor, and was the most generous, gracious and selfless person you would ever meet, always thinking of others first. As both Mother and Father to her 3 children who refer to her as their “rock”, and whose friends describe her as “the coolest”, she will always be remembered as an amazing role model for them and her grandchildren – their #1 cheerleader, biggest fan, trusted confidante and all around super – hero. There are no words to express how much Mary Lou will be missed by them every day, and by all who knew her.

Friends will be received Sunday, April 18th from 2-4 and 7-9. Funeral mass Monday,
April 19th at 10 am at St. Roch’s church with burial at St. Peters cemetery.

In lieu of flowers, we are asking for any donations to be sent to West Shore Little League ℅ Nick Sansevero, 340 Walker Street SI,NY 10303