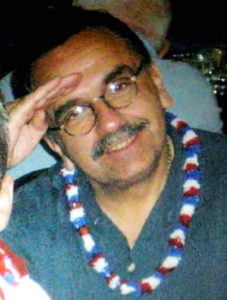 Mark L Hughes was born February 20th 1956 and passed away at home on December 30, 2016.
Born in Yankton, SD to Charles and Marie Hughes, he was the youngest of five kids. Full of life and fun, he had a magnetic personality and people gravitated toward him.
Mark worked as waiter for decades at several top notch restaurants in NYC and San Francisco, CA. In later years he became a Pioneer school bus driver, on Staten Island, which he truly enjoyed. He retired from that job in 2014.
Through Narcotics Anonymous, he found his inner peace and was blessed with gratefulness, kindness and concerns for others. He was able to help a magnitude of people get on the road to recovery from addiction. But perhaps his best attributes were his sincerity and his ability to make people laugh.
He is predeceased by his father, mother and brother Tim; survived by his two sisters Patty & Mary, brother Steven, his nieces, great-nieces, nephews, friends, and the Narcotic Anonymous family.
Rest in Peace