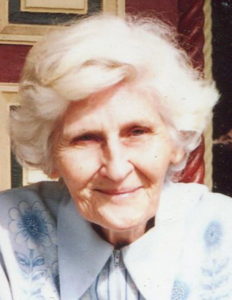 Marjorie Decker Johnson, 92, passed away peacefully at Chatham Hills Nursing home on January 3.  Born in Port Richmond and lived in Clifton after her marriage to Edward E. in 1952. She attended Wagner College and graduated from NYU with a degree in Chemistry.   She worked at Laboratories in Manhattan as a Chemist.  She was active in the Staten Island community ranging from Developmentally Disabled to Historic Preservation.  She also volunteered at Richmond Town Library as a Historian and Genealogist.

She was a founding member and actively involved in the Friends of Abandoned Cemeteries and she wrote several books on Genealogy History.  She was also a member of the Staten Island Archeology and Geological societies and as an artist created cartoons for over 10 years.  She became Staten Island Woman of Achievement in 1990 and it was one of the highlights of her life.

She was also an active member of St. John’s Episcopal Church and in her younger years she enjoyed Tennis and Hiking.

She is survived by her daughter, Kimberly Donohue (Robert) of Berkeley Heights, NJ and Thomas Johnson (Liz) of Old Greenwich, Conn.  Also survived by 6 loving grandchildren.

Visitation at Cherubini McInerney Funeral Home on Sunday from 1:00pm to 5:00pm.  Funeral leaving at 10:00am with a funeral mass at St. John’s Episcopal Church at 11:00am. Burial at Moravian Cemetery.

In Lieu of Flowers contributions to Friends of Abandoned Cemeteries would be appreciated.