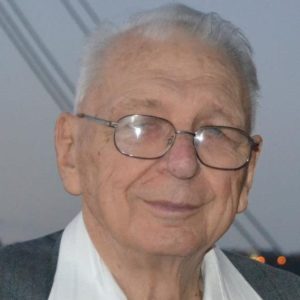 Lester A. Driscoll passed peacefully on April 3, 2020.  He was a native Staten Islander, born on October 20, 1923 to Joseph and Marian Driscoll.  Les was a graduate of McKee HS.  Upon graduating, he was employed by Bethlehem Steel in their shipbuilding division.  He left to join the US Army in 1943 and served in the 8th Armored Division in Europe.  He returned home in 1946 when he rejoined Bethlehem Steel.  He worked there until his retirement in 1982.  After returning from the war, he married Marianne Euler.  They were married for 61 years when Marianne passed in 2007.  He lived in many locations throughout the North Shore, the longest was in lower Westerleigh where he resided until 2015 when he moved to Sunrise Senior Living. He was very active at IUC until his wife’s passing and then enjoyed services at the Reformed Church on Staten Island and Princess Bay Reformed.  He was a member of the Staten Island Ballroom Dancers where he served as President in 1986 & 1987.

He is survived by his two daughters, Eileen Burchsted and Nancy Moncrief (William), his grandson, David Burchsted (Marisa), and the joys of his life, his great granddaughters, Briella and Skyla.

Due to the current coronavirus pandemic, private burial arrangements will be made with Cherubini-McInerny Funeral Home, 1289 Forest Avenue, Staten Island, NY.  There will be a private burial on Tuesday, April 14, 2020 at Hillside Cemetery in Rutherford, NJ.

In lieu of flowers, donations may be made to The Reformed Church on Staten Island Memorial Fund, 54 Port Richmond Avenue, Staten Island, NY 10302 or to a charity of your choice.  A celebration of Lester’s life will commence at a later date.