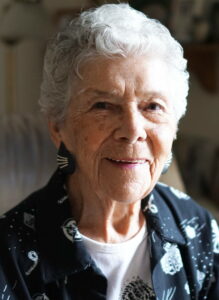 Kathryn T. Capofari, passed away on Thursday 5 November 2020. Born February 16, 1925 in Staten Island, New York, Kathryn was the daughter of the late John and Catherine Miller. Kathryn was raised in Mariners Harbor and graduated from McKee High School. She married the love of her life, Michael Capofari, in 1946. They raised their family in Port Richmond. Kathryn was a homemaker and later worked for many years at St. Vincent’s Hospital as an Emergency Room supervisor. Kathryn was a parishioner of St. Mary’s of The Assumption for many years and later at St. Paul’s, where she was a Eucharistic Minister and Lector. Kathryn enjoyed being with her family, reading, beachcombing, playing bridge and golfing. A lifelong actress who won many awards, she was also an avid writer of poetry for over seventy-five years. She painted in watercolor and crocheted, making afghans for all her grandchildren throughout the years.

Most importantly Kathryn was a woman of great faith and hope, who lived a life committed to God and finding good in all people. She was very well loved by all she met. Kathryn was predeceased by her beloved husband Michael and her son Peter.
She is survived by her loving children, Elizabeth Watt, Alexis Ventre, Paul, and Mark Capofari. She has eleven grandchildren and sixteen great grandchildren.