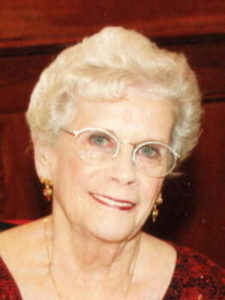 STATEN ISLAND, N.Y. –   June Baird Perrella, 89, of Westerleigh, died Friday in Staten Island University Hospital.  She was pre-deceased by her husband of sixty-five years, Angelo Perrella, who died in December 2012.

Mrs. Perrella was a homemaker and mother of six children.  She was past president of the Saint Anne’s Guild of St. Roch’s R.C. Church in Port Richmond and was also past president of the Mckee High School PTS.  Mrs. Perrella was a longtime fundraiser and volunteer for the senior group at the YMCA, West Brighton and was honored for her volunteer services at Eger Nursing Home.

Her hobbies included going to the gym, knitting, traveling and spending time with family.  June and her husband, Angelo, visited London, Paris, Bavaria, Austria, Venice and Canada.  She was an avid reader and had an adventurous spirit, as shown by her several hot air balloon rides, bi-plane ride, sail plane, zip-lining, motorcycle riding and her six gold and silver medals won in the YMCA Beatrice Victor Senior Olympics.

She was well known for her crocheting skills.  In addition to crocheting blankets and sweaters for family members, she made many items that were donated to charitable causes.