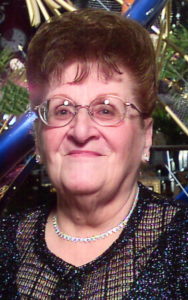 Johanna was a life long Staten Islander. She lived in Port Richmond all her life, except for the 2 years that she lived in Georgia with her husband and his family
She met her husband James, a Georgia native, while he was stationed in Elm Park, during WWII.
Johanna worked as a retail sales associate on Port Richmond Ave for many years starting in 1944 in various stores including Kresge’s, Mae Moon’s,  Albert’s Hosiery and Woolworth’s, where she retired in the early 1990’s
For many years, she enjoyed meeting friends for breakfast at the New Diner, at the corner of Port Richmond Ave and Harrison Ave
Johanna was an avid dog breeder and trainer and specialized in German Shepherds. She loved watching western TV shows and movies and loved listening to the music and watching the movies of Elvis Presley.

Funeral will be held at Cherubini McInerney Funeral Home on Monday, April 30, 2018 at 10am followed by a burial at Fairview Cemetery.  Visitation for family and friends will be on Sunday from 2-4pm and 7-9pm.