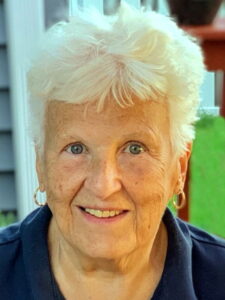 Jeanne M. Palladino, nee McKinney, 85 of Staten Island passed away on Sunday March 28th surrounded by her loving family in her home.

Jeanne was born on September 4, 1935 in Brooklyn. She was the oldest child of Mildred and John McKinney. She is survived by her brother John (Lila) and her sister Kathleen McKinney, CSJ.

Jeanne was predeceased by her husband of 51 years, Peter Palladino and her grandson Peter John Palladino.

Jeanne grew up in Flatbush, Brooklyn. She was a big fan of the Brooklyn Dodgers and being friends with Duke Snider she got to know the team. She was considered a good luck charm of the 1955 series.  Jeanne graduated from Fontbonne Hall Academy and attended Marymount college in Manhattan. In her early 20’s she worked at Pacific Far East Line where she met her husband Peter. They were married and settled in Staten Island where they raised their family.  Jeanne was very active in her children’s and grandchildren’s lives. She enjoyed celebrating and hosting all holidays for her extended family. She was the most generous and gracious person you would ever meet, always thinking of others first. After raising her children she went back to work at St. Vincent’s Hospital where she worked as a clerk in Labor and Delivery.  She enjoyed lasting friendships of many  . In her later years she moved in with her daughter and her family. She loved being surrounded by her grandkids and being a part of their lives, everyone loved “Memar”.