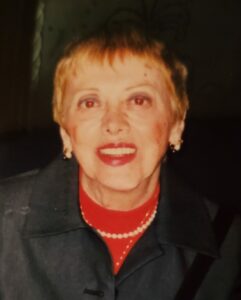 A writer by profession, Gloria published short stories in a number of anthologies and in such national publications as Redbook and the Saturday Evening Post. Her story “Come into my Parlor” was originally published in Alfred Hitchcock’s “A Choice of Evils” and was later remade for television as part of the Orson Welles Great Mysteries Series. For many years, Gloria served as executive secretary for the Mystery Writers of America, and she taught fiction writing and tutored aspiring authors. Gloria was also an avid table tennis player; she played into her 90s and garnered countless trophies.

Gloria adored her family and relished her Syrian-Lebanese American roots. She is predeceased by her parents, brother (Robert Amoury), double-first cousin (Raymond Amoury) and numerous beloved aunts and uncles. She is survived by her niece, Nancy Amoury Combs, and grand-nephew Robert Combs, both of Virginia, along with a battery of cousins in Kansas, Virginia, New York, the Bahamas, and the United Kingdom, among other locations.

Church of the Epiphany