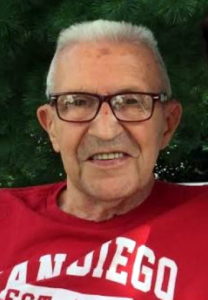 Gerald Carannante, or Jerry as he was known to all, beloved husband, father, grandfather and great-grandfather, passed away on April 7, 2020 at the age of 93.

Jerry was born on Staten Island, New York on Independence Day, July 4, 1926, a source of pride for his family of Italian immigrants to the United States. He lived almost his entire life on Staten Island and was a member of the Church of St. Roch Roman Catholic parish.

Jerry had a long and successful career in supermarket management and food product placement, sales and marketing before retiring in his early seventies.

Jerry was one of six siblings and a father to Gerald (also known as Jerry), who have all predeceased him. He is survived by his wife, Edith of 72 years, daughter-in-law Denise, grandsons Ray (Leslie)  and Jerry (Alia), and great-grandson Holden.

As a young man, Jerry’s greatest passion was making the rounds in his local amateur bowling circuit where he was well known for his talent in the sport. Later in life he enjoyed tending to his vegetable gardens, collecting coins and baseball memorabilia, and watching as much Yankees baseball as possible!

The common thread throughout his life was his love of being with his family. He will always be remembered by his grandchildren for being such a present and influential part of their upbringings, including weekly trips to the toy store, playground and bowling alley.