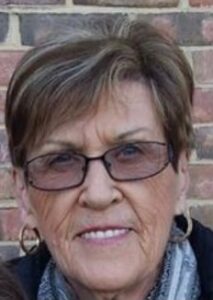 Florence Woodford passed away at home surrounded by her family on 2/21/22.

A loving Wife, Mother, Nanie, Great-Nanie, a caring friend to many.

Born Florence Lewis in Brooklyn in 1940. Florence was a graduate of St. Ephrem’s and Fontbonne Hall Academy.  She worked on Wall Street for Harriman Ripley & Co.  After marriage and the birth of her first child, she became a stay at home Mom.  Staten Island became her home when she and her husband Thomas relocated over 56 years ago.  When the last of her five children started school, Florence became a paraprofessional in Special Education working at PS69 and later PS37, retiring in 1996.  At the same time, she attended the College of Staten Island and graduated in 1983.   Florence was a past member and Treasurer of the St. Rita’s Ladies Auxiliary where her children attended school. She served on the Parish Council and was a member of the St. Rita’s Ladies Guild up until a few years ago.  She also volunteered in St. Rita’s School tutoring children in reading.

During the Rubella Epidemic, Florence contracted the disease during her pregnancy with their daughter Kim.  This led both Florence and Tom on a path of advocacy that continues to this day.  When their handicapped daughter, Kim, started school, Florence and Tom became very active in the Parent Association. Florence became the Vice President of the association at the New York Institute for the Education of the Blind providing input on the quality of life and programming for the disabled.

They were part of a class action initiative that fought for the rights of disabled children to get specialized school busing that did not exist at the time.  They discovered there was very few services available especially when a child “aged out” of the education system at 21. They and other parents diligently advocated and lobbied Albany for assistance.  She and her husband Tom were co-founders of Advocates for Services for the Blind Multihandicapped opening the first group home in 1989. She and her husband continued to work diligently to provide a quality of life for all those with multiple disabilities.  The ASBM Agency operated six group homes and a day habilitation program up until they became a larger agency by merging with Program Development Services last year.  One of the most innovative is a group home in Bay Ridge where the primary language is sign language and many of the direct care workers are deaf signing employees.  Florence has served on the Executive Board since the founding of the Agency.

Through the years, she has held the position of Secretary, Vice President and had served as President for several terms before stepping down a few years ago.  Her daughter, Jill now serves on the board continuing that legacy.

Florence and her husband Tom have traveled most of the States including Alaska. Also, extensively throughout Eastern and Western Europe, Russia, Morocco as well as gone on many cruises.  They enjoyed visiting extended family in Newfoundland, Canada where both of their parents were from.  Florence’s greatest joy though was her spending time and doing for her children and grandchildren.

She is survived by her loving husband Thomas of over 60 years, her children John (Kathleen), Kim Woodford, Jill Taylor (Sean), Thomas, Jr. and Scott.  Also, her beloved grandchildren and great-grandchildren, Keith, Daniel, Sean, Alexandra, Kim Marie, Seamus, Hunter and Peyton.  She was predeceased by her parents Florence and John (Jack) Lewis and her sisters Helen Wardell and Marie McCarthy.

Visitation will be held at Cherubini McInerney Funeral Home, 1289 Forest Ave, Sunday, 2/27, 2-4 and 7-9. Funeral Service is scheduled for Monday, 2/28 at Holy Family Church, 366 Watchogue Road, 11:00 am with Christian burial at Resurrection Cemetery.

In lieu of flowers, she requested donations be made in her memory to: Program Development Services Inc, 6916 New Utrecht Ave. Brooklyn, NY  11228