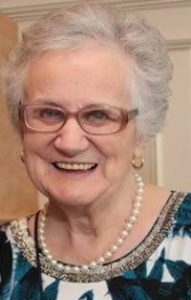 A long time Staten Island resident, she resided in NJ for the past three years.

Jean worked as a bookkeeper prior to becoming a full time homemaker after her children were born.

She was preceded in death by her husband the late Robert Foley and son Kenneth. She is survived by her children Robert  Jr. Patricia, and Stephen. Jean was the Grandmother of Rebecca, Dayna, Laura, James, Caitlin, Regina, Diana, Stephanie, Matthew and Meaghan. She was also the loving Great-Grandmother of Sebastian, Dylan, Keegan, Jack, and Colton.  She is also survived by many nieces and nephews.

Jean touched the lives of many people and will be missed by all.

In Lieu of flowers,  donations to the American Red Cross or a donation in her name for the next blood drive in your area would be greatly appreciated.