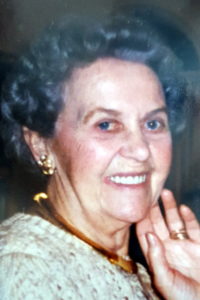 Edna led a very active life. She enjoyed being at and working with her late husband, Arthur Bensen at Frontier Town in the Adirondack mountains of New York.  During her early days, she enjoyed waterskiing and horseback riding.  She also was fond of sewing and knitting.

Arrangements held at Cherubini McInerney Funeral Home in Staten Island.  A graveside service will be held on Saturday at 11:45am at Oceanview Cemetery.