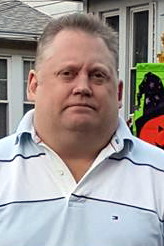 Born September 27, 1969 in Staten Island, New York, he was a graduate of McKee High School and was a United States Navy veteran who served on the USS John F. Kennedy in Philadelpha, PA, where he also received a National Defense Service Medal.

He is survived by his loving parents, Brian and Debbie Agrell, his sister, Stacey Olsen (Agrell) and his paternal grandparents, Kenny and Faith Chappell.

Brian will be deeply missed by all.