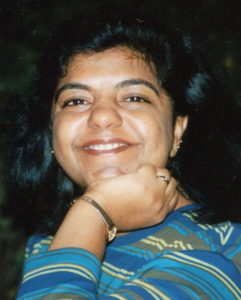 Asha Middendorf
Known for generosity to charities and love of children, neighbors
Asha (nee: Mansinghani) Middendorf of Grymes Hill, recently passed away from natural causes.
A native of Pune, India, Asha emigrated to the U.S. and married Brian Middendorf in 1999. Asha was a selfless caregiver to her late mother-in-law, Anna Middendorf and also ran a travel business from their home. Known by all for her generosity with charities and her love of children and neighbors, Asha’s favorite charitable causes were Native American missions.
An avid reader and master of world financial markets with a master’s degree in commerce, Asha was also known as an excellent cook who amply supplemented her table with food grown in her garden.
As a travel agent she was a branch manager for SOTC travel company in Pune, India, where she honed her skills before marriage and put them to good use while operating her own business.
She had a voice like an angel and was meticulous when dealing with people both over the phone and in person. Asha and her husband engaged in extensive world travel throughout their marriage, returning to her beloved India eight times. Through all of her world travel, her love of people was always evident in the relationships she formed wherever she went. With a kind word for all, Asha was beloved by all who knew her. She leaves behind a family and friends devastated by her passing from us all too soon.
Surviving Asha are her American family: husband, Brian Middendorf; sisters-in-law, Lisa Kenific and Karen and Randi Demary, as well as her family in India: sisters, Maya and Rani and her brother, Ramesh, as well as six nieces and nephews. Asha was preceded in death by her brother, Haresh and her parents, Gobindram and Jyoti Mansinghani.
Funeral arrangements include cremation, and are being coordinated by Cherubini McInerney Funeral Home. A Hindu ceremony will be held at the funeral home.