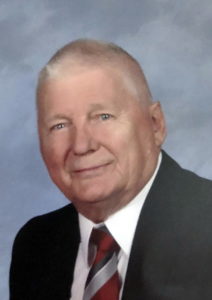 Arne Kennet Lorentzen, 93, son of the late Axel & Sigrid Lorentzen and pre-deceased by his sister Ruth “Tootsie” Paterson, passed away on April 30th, 2018. Born on October 4th, 1924, Mr. Lorentzen was a life-long Staten Island resident. While attending PS 36, he won the NYC spelling bee championship, correctly spelling “syzygy.” He then graduated with honors from Tottenville High School at the age of 16. As a high school student he worked on a vegetable delivery truck, helping support his family during the depression. After graduation he rode a bicycle from Staten Island to Niagra Falls, twice.

Two days after the bombing of Pearl Harbor, Mr. Lorentzen enlisted into the Navy, and served as a 3rd Class Electronics Technician Mate on the USS San Juan (CL-54). In his tour of duty, he served in the South Pacific Theater, and was moored in Toyko Harbor at the signing of the Japanese Instrument of Surrender. Following the surrender, he participated in operation “Magic Carpet” which repatriated millions of American and Allied prisoners-of-war. He was awarded the American Theatre Medal, the Victory Medal, and the Asiatic-Pacific Medal with 2 stars.

During his family years, Mr. Lorentzen was a very active member of Nansen Lodge, Sons of Norway, in Travis. He was a Life Member of this fraternal organization, and was awarded a 75 year membership certificate. After retirement, and until he gave up driving at the age of 90, he was an avid coupon clipper, and frequented many north shore supermarkets. He also donated 152 pints of blood over his lifetime.

Along with his beloved wife, Mr. Lorentzen is survived by three sons: Kenneth and wife Lise, John and wife Jessie, and Erik and wife Laura, six grandchildren: Annelise, Silje, Kaitlyn, Miles, Axel, and Parker, and “grand dogs” Sunny and Ruben.

Donations in lieu of flowers may be made to the Nansen Lodge Scholarship Fund. Friends and family will be received at Cherubini McInerney Funeral Home (formally Meislohn-Silve Funeral Home) on Thursday May 3rd, from 2-4pm & 7-9pm with the funeral service on Friday, May 4th at 10:30am followed by a burial at Oceanview Cemetery.