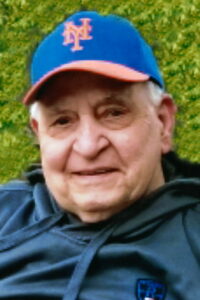 WWII Veteran Anthony Gonzalez of Fort Wadsworth, passed away at home on January 20, 2021 at the age of 98.

Anthony Gonzalez (Tony) was born on December 29, 1922 to Juana Gonzalez in Manhattan, NY.  When he was six years old he was separated from his mother as she was injured due to a car accident and placed in an orphanage for two difficult years while she recuperated.

He attended I.S. 52 in the Bronx, and then Samuel Gompers Vocational High School where he was a manager for the varsity basketball team.  There he trained for the U.S. Army Signal Corps., and graduated in 1943.  He was deployed on October 16, 1943 via the USS General John Pope.  Serving in the Pacific Theater of the U.S. Army as (Corporal) T5-897 Signal Company, he transported via C-47 Douglas Aircraft and was honorably discharged on December 28, 1945.

While on leave in 1945 he attended a church function and met Ada Milda Barreto.  They corresponded through long letters to each other and dated after his discharge for almost three years.  They were married on September 5, 1948 for almost 68 years until Ada’s passing in2016.  The couple lived in the Bronx and in 1956 Anthony became a member of the I.B.E.U. Local 3 Machinist Division.  He worked for Holmes Protection Company from 1956-1985.  For 12 years Tony and Ada tried to start a family and in 1960 they welcomed their first son, Anthony, Jr. into the world, followed by Michael in 1962 and Eddy in 1963.  Tony moved his family, along with his mother to Fort Wadsworth in Staten Island in 1963.  He took care of his mother until her passing at the age of 97.

When moving to Staten Island, Tony joined St. John’s Episcopal Church where he selflessly volunteered his time and served as a vestry member for over 30 years.  He watched from his window as East Shore Little League was erected and then coached his sons when they were members.  He loved watching the baseball games and eventually got to see all his grandchildren play ball there too.  He was a lifelong Brooklyn Dodger Fan but that shifted in 1962 when the New York Mets emerged.  He was a stamp collector and a member of the Golden Oldies bowling League for many years with his wife.  They would also participate in the Senior Olympics together.  Tony and Ada loved to travel and were happy to visit Spain when they did.  He was proud of his three sons and loved spending time with them and his ten grandchildren at family functions. He was even fortunate enough to have the pleasure of being a great-grandfather of six.  Tony always had a pet and loved taking his dogs for walks in the neighborhood.  He always tried to max humor into his conversations to lighten it up.  He was humble man and always showed great respect for others, God and Country.  He ended every night, as his son Michael who cared for him put him to bed by saying, “Good night, God bless, and have a song in your heart”.